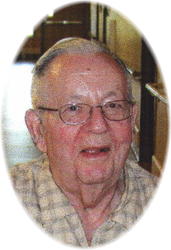 The Mass of Christian Burial will be 11:00 AM, Thursday, November 29, 2012 at the St. Martin Catholic Church  in St. Martin for Gerald Bergren, age 84 of St Martin.  Burial will be in the parish cemetery.  Gerald died peacefully Sunday at the Mother of Mercy Nursing Home in Albany from Parkinson’s.  There will be a visitation from 4-9:00 PM Wednesday and again after 10:00 AM Thursday at the St. Martin Catholic Church.  St. Martin parish prayers will be at 4:00 PM Wednesday at the parish hall.  Arrangements are being made by the Miller-Carlin-Brenny Funeral Home in Albany.Gerald was born July 10, 1928 in Little Falls to Oscar and Myrtle (Fye) Bergren.  He graduated from Little Falls High School and he served in the U.S. Army from 1951 – 1952.  During his life, he lived in Little Falls, Minneapolis, St. Paul, Sobieski, St. Martin and Albany.  Gerald married Lorraine Birchem on September 15, 1953 in Swanville.  Gerald owned “Jerry’s Bar” with his wife in Sobieski and St. Martin from 1960-1971  He worked for the U.S. Post Office for over 27 years, retiring as Post Master in 1990.  He was a member of the St. Martin Catholic Church, Lake Henry American Legion Post #428, the Little Falls VFW Post 1112 and the St. Martin Volunteer Fire DepartmentGerald is survived by his children, Diana Bergren, Burnsville; Sandra (Mark) Dirkes, Avon; Judy (Ken) Turner, Mount Juliet, TN; and daughter-in-law Nancy Bergren, Pine Island.  He is also survived by six grandchildren, Trent and Eric Dirkes, Laura (John) Bazal, Ashley Bergren and Katie and Shelby Turner.Gerald is preceded in death by his parents, his wife Lorraine in 2007, his son, Gary Bergren, in 2011,  his brothers and sisters, Eldrige Bergren, Russell Bergren, Dale Bergren, Genevieve Bobo, Phyllis Young and Beverly Remer.In lieu of flowers, donations are preferred to the Mother of Mercy Campus of Care in Albany.

In lieu of flowers, donations are preferred to the Mother of Mercy Campus of Care in Albany.

Our sincere condolences on the loss of your dad. It is never easy and we know the loss of a last parent closes a door and he will be missed. Sincerely Bill, Kory & Diane

Jerry way such a great relative to me and my parents (Rich and Liz), My blessing go to the family.