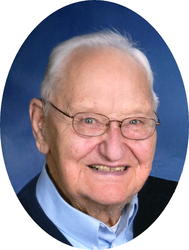 The Mass of Christian Burial, celebrating the life of George C. Meier, age 90 of Albany, will be 11:00 AM Wednesday, December 12 at Church of Seven Dolors in Albany.  Burial will be in the parish cemetery.  George died Sunday at the Mother of Mercy Nursing Home in Albany.  There will be a visitation from 4-8:00 PM Tuesday, and again after 10:00 AM Wednesday at the Seven Dolors church gathering space.  Seven Dolors parish prayers will be at 4:00 PM followed by the Knights of Columbus and the St. Joseph’s Society at 7:00 PM Tuesday night at the church.  Arrangements are being made by the Miller-Carlin-Brenny Funeral Home in Albany.George was born February 22, 1922, in Albany to Ludwig and Anna (Froelich) Meier.  He was raised on the family farm where he worked all of his life.  George farmed with his 2 brothers and one sister until 1977.  He married Cordella (Cremers) Kloeppner on May 7, 1977 in St. Mary’s Help of Christian’s Catholic Church in St. Augusta and the couple purchased their own farm near Albany. George also worked for the Stearns Morrison Enterprise after retiring from farming.   Just recently the couple moved into the Mother-of-Mercy apartments.  George enjoyed watching the Minnesota Twins play baseball and he loved to spend time with his family, especially his grandchildren.  He was a member of the Seven Dolors Catholic Church in Albany, the Knights of Columbus and the St. Joseph’s Society.George is survived by his wife, Cordella, Albany.  His children, Sharon (James) Westphal, Fargo, ND; Kevin (Cindy) Kloeppner, Annandale, Julie Kleve, Albany; his sister, Dorothy Dirkes, Albany, 12 grandchildren, 18 great-grandchildren and sister-in-law, Florentine Meier.He is preceded in death by his parents, his son, Victor Kloeppner; his brothers and sisters, Ann Schleppenbach, Tony Meier, Lena Meier, Joseph Meier, Agnes Meier, Theresa Blenker, Peter Meier, Andrew Meier and Nick Meier; and his son-in-law DelRoy Kleve.

Visitation will be from 4-8:00 PM Tuesday, December 11 and again after 10:00 AM Wednesday Seven Dolors parish prayers will be at 4:00 PM Tuesday followed by the Knights of Columbus and the St. Josephs Society at 7:00 PM Tuesday

Visitation will be at the Seven Dolors Catholic Church parish center in Albany, MN

Dear Cordella,
Sorry we can’t attend but you are in our prayers. Hopefully we’ll be able to stop sometime when in your area.
This week is all our grandchildren’s Christmas concerts.

Dear Cordella, Ron just told me of George’s passing. My thoughts and prayers are with you and your family.