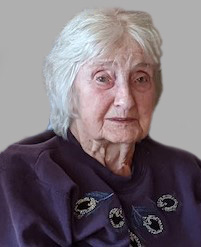 Genevieve” Genny” Cecelia Locnikar, age 92 of Melrose, formerly of Albany, passed away at the Pine Villa Nursing Home, Melrose, MN.  Mass of Christian Burial on Tuesday, August 16, 2022, at Church of Seven Dolors, Albany at 10 AM.  Visitation on Monday, August 15 at Miller-Carlin Funeral Home, Albany from 6-8 PM and one hour prior to Mass at the church on Tuesday.  Entombment at Church of Seven Dolors parish cemetery, Albany.

Genny was born on January 2, 1930, in Albany to John and Johanna (Lesser) Ebensteiner.  She married Conrad Locnikar on June 28, 1948, in Albany.  Genny and Conrad owned and operated a bulk milk truck business starting in 1968.  She learned to drive one of the bulk trucks and worked with Conrad.  She worked as a CNA for 20 years at Mother of Mercy Nursing Home in Albany.  She loved listening to and watching the Twins games with Conrad.  They were married for 66 years, before Conrad passed away.  Genny cooked and baked for her family.  She had a large garden and grew raspberries to make jam.

Monday, August 15, 2022 from 6-8 PM at Miller-Carlin Funeral Home in Albany and one hour prior to Mass at the church on Tuesday.