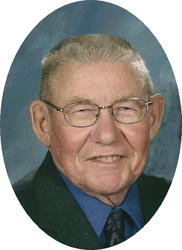 Services celebrating the life of Frederick “Fritz” Lentz, age 82, of Avon will be 11:00 AM Thursday, February 17, at Holy Cross Lutheran Church in St. Cloud.  Burial will be in Trinity Lutheran Cemetery, Sauk Rapids.  There will be a gathering of friends and family from 4-8:00 PM Wednesday at the Miller-Carlin Funeral Home in St. Cloud and again after 10:00 AM Thursday at the church.Fritz was born December 18, 1928 in Henry, South Dakota to Edward and Mable (Jaehn) Lentz.  He was in the U.S. Army, serving in Korea, from 1951 until 1952.  He married Lorraine Grams on March 28, 1954 in Fairfax, MN.  The couple lived in Gibbon until 1966 and in Glencoe from 1966 until 1999.  Fritz was co-owner of K&L Cabinets in Glencoe until he retired in 1999, at age 70.  Fritz and Lorraine moved to Avon in 1999.  Fritz was a master at wood working and he enjoyed building many things for his family.  He was a member of Holy Cross Lutheran Church in St. Cloud; the Gibbon American Legoin and the Glencoe VFW.Fritz is survived by his wife, Lorraine, Avon; his two children, Jon (Lori) Lentz, St Cloud and Jodi (Chris Fandel) Lentz, St. Cloud.  He is also survived by two grandchildren, Matthew and Meghan Lentz, St. Cloud; his brother and sisters, Edward (Verona) Lentz; Plymouth; Beatrice Koester, Glencoe; Marlian Bandow, Gibbon; Barbara (Ronald) Rieke, Gibbon; Evelyn Herschman, Glendale, AZ; and sister-in-law, Betty Lentz.Fritz is preceded in death by his parents, two children, Julie and Jay Lentz; and his brothers and sisters, August Lentz, Henry Lentz, Otto Lentz, Daniel Lentz, William Lentz, Herbert Lentz, Leigh Lentz, Herman Lentz, Alma Deunow, and Edna Kremer.

Lorraine, John & Jody;
Jill called with the news of your loss today. My very deepest sympathies go out to all of you. Was so sorry to hear the news…Will try to call sometime after things settle down a bit for you.

We have such fond memories of Fritz. His memory will live on in all of his beautiful wood projects.
You have our thoughts and prayers.
Dale and Mary

Lorraine, Jon & Lori, and family; my heart grieves with you in this time of loss. Words are hard to express so just know that our thoughts and prayers are with all of you……love you all!!
Brad & Jackie

Lorraine and Family
So sorry to hear about Fritz. My thoughts and prayers are with all of you!
Much Love

Aunt Lorraine, Jon & Jody,
We are so sorry to hear about Uncle Fritz. Our deepest sympathies are with you.

Lorraine & family
Sorry to hear of your loss. Know that you are being thought of and prayers are being sent your way.
God Bless!
Carol & Jon

Lorraine and family,
Vic and I are thinking of you and are so sorry for your loss. Always was so nice to see you when you came back to Good Shepherd for visiting. Saundra and Vic