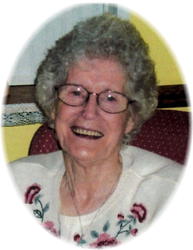 Memorial Services celebrating the life of Evelyn Bertha Laura Olson, age 86 of Holdingford (formerly Minot, ND) will be at 2PM Sunday, January 5, 2014 at the Community Country Church in Holdingford.  Pastor Gregg Valentine will officiate and burial will take place at the South Elmdale Cemetery at a later date.  Evelyn passed away peacefully early Wednesday morning surrounded by her family.  There will be a gathering prior to the service from 1-2PM Sunday afternoon at the church.  Arrangements are being made with the Miller-Carlin Funeral Home of Holdingford.Evelyn was born March 22, 1927 to Albert and Florence Howe in Bury Saint Edmunds, Suffolk, England.  She grew up in England with her five siblings and emigrated to the United States in October of 1947.  Evelyn married Charles Olson on December 2nd 1947 in Minot, ND where together they raised their ten children.  She spent many years as a mother and homemaker as well as a caregiver to others.  After Charles’ death in 2006, Evelyn spent a few years traveling to visit her children and siblings, who are spread out in the United States, England, and Canada.  She relocated to Holdingford in 2008 to be near her family.  Evelyn was a member of the Holdingford Pedals to Petals Garden Club, the British Wives Club, and the local Senior Citizens Group.  She enjoyed watching poker on TV and was an avid card player who took cards very seriously.  Evelyn attended the Country Community Church in Holdingford.Evelyn in survived by her children Imogene (Derry) Crouch, England; Ruthe (Mike) Odden, Holdingford; Joyce Olson, Holdingford; Dorothy Olson, Arizona; Don (Sandee) Olson, Ohio; Robert Olson, Washington; Ron (Taryce) Olson, North Dakota; Pete (Jan) Olson, Arizona; daughter-in-law Geri Olson, North Dakota; her 23 grandchildren, 46 great-grandchildren, 11 great-great-grandchildren; and her siblings Dorothy LaMont, Canada; Ben Howe, England; Burt Howe, England.She is preceded in death by her parents Albert and Florence Howe, her husband Charles Olson, her children Kenneth Olson, Marion Geiser, her step-son Chuck Olson, her brothers Don and Peter Howe, and her grandsons Danny Geiser, and Nick Olson.

There will be a gathering prior to the service from 1-2PM Sunday afternoon at the church.

Thoughts and prayers to Evelyn’s family and friends. She was such a friendly and smiley person. May she have many flower gardens in Heaven to choose to walk through! You will be missed

Love you! May you rest in peace and always know that your light shines on all of us!!

Our hearts are hurting today as is all of yours. Evelyn was very special to us too. As we have shared in our love for Evelyn, lets keep in touch to share our memories.

Love and miss you Grandma Olson Rest in Peace