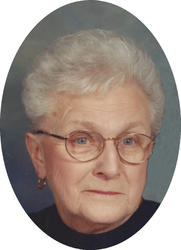 Mass of Christian burial celebrating the life of Evelyn Mary Krystosek, age 94 of Holdingford will be on Wednesday, September 27, 2017 at 10:30 a.m. at Our Lady of Mount Carmel Catholic Church in Opole, MN. Father Glenn Krystosek will officiate and Father Eugene Doyle will concelebrate, with burial in the parish cemetery.  Evelyn died Saturday, September 23, 2017 at her home. Visitation will be from 4:30 to 7:00 p.m. on Tuesday, September 26 and 1 hour prior to the mass on Wednesday. The Christian Women of Our Lady of Mount Carmel will pray the rosary at 7:00 p.m. on Tuesday. Arrangements by Miller-Carlin Funeral Homes.

She was born on August 2, 1923 in Bellevue Township, Royalton, MN to Isidore and Rose (Janski) Schlichting. Evelyn was united in marriage on May 17, 1943 to Eugene Krystosek at Holy Trinity Catholic Church in Royalton, MN. Evelyn and Gene operated the family farm near Opole. She was a member of the Our Lady of Mount Carmel Christian Women and chaired the funeral lunch committee at OLMC for many years. Evelyn taught her family a love of nature and passed along her strong faith to her family. She loved gardening, walking, cooking, baking her famous Polish coffee cake, bread, pies and cakes.

Mass of Christian burial will be on Wednesday, September 27, 2017 at 10:30 a.m. at Our Lady of Mount Carmel Catholic Church in Opole, MN.

I was sorry to hear about the death of aunt Evelyn.  I am Fred Schlichting, a nephew, son of her brother Joseph Schlichting.  I am sorry that I will not be able to attend the funeral this week, but you will be in my prayers and thoughts.