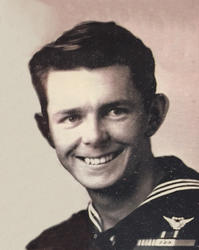 A Celebration of the life of Emmett Morgan, will be held on March 30, 2017 from 1pm to 4pm in the gathering room located within 1101 Main Street NE, Minneapolis MN. Internment will be held at Fort Snelling National Cemetery in Minneapolis on March 31, 2017 at 1pm.

Emmett was born on January 24, 1924 to Rome and Mae (Tigue) Morgan in Minneapolis.  He grew up with three brothers and graduated from DeLaSalle High School.  In 1942, Emmett enlisted in the United States Navy and later rejoined the Marine Corps until his honorable discharge in 1950.  He served in the Solomon Islands for over 2 years under Admiral Chester Nimitz as a tail gunner on an SBD dive bomber.  Emmett received many commendations and medals, including the Air Medal which was presented later in life.  On November 9, 1945, he married Evelyn “Mozelle” Plunk in Memphis, TN and together they welcomed six children to their family.  Emmett worked for BBDO for over 20 years as a commercial artist and the Creative Vice President.  He was creative throughout his life.  He often gave his time and talent to enrich the lives of the young by teaching, to honor legacies of historical North Dakotan figures, and to share joy with the ill through Make-A-Wish.  Emmett’s heart was great and giving, but those most important to him were his family.

He is preceded in death by his wife Mozelle in April of 2010, his parents Rome and Mae, his son Bernard Thomas and infant daughter, his brothers Bernie, Leo, and George, and his grandson Andrew.

Service information will be at a later date. Please check back as this will be updated when the service is scheduled.

I’ve known Mr and Mrs Morgan all of my life – they were great friends of my parents, Richard and Mary Pieper, and I have the fondest memories of them both. I have a sketch (framed) in my bedroom which Mr Morgan quickly drew for me when I was a child “Winter Birds” – it was when they still lived in Richfield. One time, at one of my parents’ Christmas parties, the sterno caught a table cloth on fire and Mr Morgan drew a funny cartoon of the event – which my parents still have. Rest in peace Mr Morgan – thank you for all the kindness you showed me, and my parents! My condolences to all of you! With love, Tina Pieper Bigelow