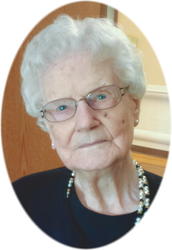 The Mass of Christian Burial celebrating the life of Emma Voit, age 99 of Albany, will be 11:00 AM, Monday, August 31 at the Seven Dolors Catholic Church in Albany.  Burial will be in the parish cemetery.  Emma died Tuesday at the Mother of Mercy Nursing Home in Albany.  There will be a visitation from 4-8:00 PM Sunday,  August 30 and again after 10:00 AM Monday, August 31  at the church in Albany.  Seven Dolors parish prayers will be at 4:00 PM Sunday followed by the Christian Mothers and the Mission Groups at 6:30 PM.  Arrangements are being made by the Miller-Carlin Funeral Homes.

Emma was born May 22, 1916 in Albany to August and Josephine (Korte) Kohorst.  She married Alfred Voit on August 5, 1941 in Albany.  The couple farmed together near Albany.  Emma also worked at the Albany Area Hospital and the Mother of Mercy Nursing Home for a short while.  Emma was a great baker and she made fantastic pies with light crusts.  She was a member of Seven Dolors Catholic Church, Seven Dolors Christian Mothers, Catholic Aid and several Mission Groups.

The Mass of Christian Burial will be 11:00 AM, Monday, August 31 at the Seven Dolors Catholic Church in Albany. Burial will be in the parish cemetery.

What a sweet, sweet lady!  I often wonder how our world will succeed without her generation.  They are the strongest, hard working, faithful generation ever.  I know she has wanted to go for some time and be with Al and now she is there and happy.  Thoughts and prayers to all her precious family!  May she fly with the angels that she has been seeing.  A great loss but a wonderful ending.   And, she embroidered the best dish towels ever.