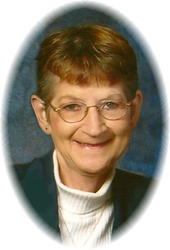 Funeral services celebrating the life of Elizabeth “Liz/Betty” Lorraine Symanietz, age 64 of Richmond will be Tuesday, July 10th, 2012 from 4-8 PM at the Miller-Carlin Funeral Chapel in Albany. Liz died in her home near Richmond Saturday morning.  Funeral Arrangements are being made with the Miller-Carlin Funeral Home of Albany.Elizabeth was born March 20th, 1948 in Sobieski, MN to Joseph and Susan (Trutwin) Birchem.  She grew up in Sobieski, but also lived in Waite Park, St. Stephen, and St. Martin before retiring to the cabin near Richmond.  She married Richard J. Symanietz on August 28th, 1965 at St. John the Baptist Church in Swanville.  Liz was a loving mother and home maker raising her four children.  She had a passion for embroidery, but most of all loved spending time with her family and grandchildren.  She was a member of the Waite Park Ladies Auxiliary and St. Martin Catholic Church.Elizabeth is survived by her children Richard (Carol) Symanietz Jr., Albany; Renee Symanietz, St. Joseph; Roxanne (Chad) Pringle, Sartell; her seven grandchildren; and her siblings Ben (Doris) Birchem, Arizona; Ruth (Larry) Hlad, Randall; Jim (Kathy) Birchem, Little Falls; and Mary Birchem, Little Falls.She is preceded in death by her mother and father Susan and Joseph Birchem, husband Richard Symanietz, her daughter Rhonda Langner, and her siblings Loretta Larson, Romona “Mona” Brezinka, Lorraine Bergren, Joey Birchem, Irene Roerick, Douglas “Buck” Birchem, ElRoy “Tuffy” Birchem, and child brother John Birchem.

Funeral services celebrating the life of Elizabeth Liz/Betty Lorraine Symanietz, age 64 of Richmond will be Tuesday, July 10th, 2012 from 4-8 PM at the Miller-Carlin Funeral Chapel in Albany.

Mom I love you so much, and I know you are in heaven with dad and Rhonda, you were so much to me and I will miss you, you will be in my heart forever, Love your daughter, Renee

Auntie Betty,
To a wonderful godmother that was always fun to be around and gave great Christmas and Birthday presents too! Thanks for all of the great memories and the thoughtful cards and letters you would send me. I love you and will miss you. Steffanie

To Betty’s family, Gary and I are so sorry for you loss. Although we never met Betty personally we feel we know her through her brother, Jim, and through Steff. May our Savior comfort all of you. God bless.