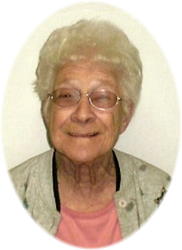 Funeral Services celebrating the life of Elizabeth Ann Silvers, Age 85 of Osage (formerly Albany) will be 11AM, Monday, October 17, 2011 at Immanuel Lutheran Church in Farming.  Pastor Frederick Kutter will officiate, and burial will take place in Our Saviors Lutheran cemetery following the service.  Elizabeth died at the Immanuel Cottage and Day Spa Nursing Home in Detroit Lakes early Wednesday morning.  Friends may call from 4 to 8 PM Sunday, October 16, 2011 at the Miller-Carlin Brenny Funeral Home in Albany and again from 10AM until the time of service on Monday at the church.  Arrangements are being made with the Miller-Carlin Brenny Funeral Home of Albany.Elizabeth was born December 12, 1925 to Barney and Theckla  Monn.   She married Reuben Christen in 1941.  Reuben passed away in 1968.  She later married Roman Mager in 1970, who later passed in 1989.  She was most recently married to Theodore Silvers in 1994 until his passing in 2010.  She lived in the Albany area nearly her entire life until moving to Osage with Ted in 2000.  She worked her life as a loving mother and house wife.  She also worked a short time at the Albany Hospital.  She was a member of Immanuel Lutheran Church of Farming.Elizabeth is survived by her children Donald Christen, St. Cloud; David (Toni) Christen, Detroit Lakes; Joyce (Carl) Gilsrud, St. Rosa; Mark (Darlene) Christen, Farming; her sister Dolly (Jerry) Kemling, St. Paul; her 14 grandchildren, 22 great-grandchildren, and 2 great-great-grandchildren.She is preceded in death by her mother and father Barney and Theckla Monn, her husbands Reuben Christen, Roman Mager, and Theodore Silvers; her infant daughter Kathleen Louise Christen; her siblings, Agnes, Lucille, Marie, Robert, and Richard; and her grandson Douglas Eugene Gilsrud.

Friends may call from 4 to 8 PM Sunday, October 16, 2011 at the Miller-Carlin Brenny Funeral Home in Albany and again from 10AM until the time of service on Monday at the church.