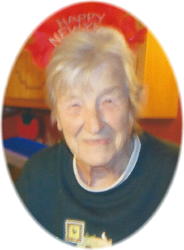 Eleanore was born on October 12, 1931 in rural Albany to Theodore and Grace (Christian) Lemke.  She attended country school in Albany and later received her GED.  She married Bill Miller on October 17, 1951 in International Falls.  After marriage the couple lived in rural Avon.  Eleanore took great pride in raising her three sons. Eleanore enjoyed flowers and gardening, fishing, and watching professional bull riding.  She was proud of her lemon tree that she grew in her house.  She also was an avid hunter; she went hunting while 7 months pregnant with her second son. Eleanore was a loving mother and grandmother to so many as she took in 6 nephews/nieces after their parent’s death.She was a member of the Our Saviour’s Lutheran Church in Albany.  She was always active in church as a Sunday school teacher, and in the ladies aide groups.She is survived by her husband Bill; children, Alan ( Cathy) Miller, Rice;  Bryan (Andrea Wolbeck), Avon and Kim (Tara Petron), Avon; 9 grandchildren; 5 greatgrandchilren; Elmer “Wid” (Florence) Lemke, Sturgeon Lake; Verna Durband, St. Paul and Gracie Solarz, Albany.She was preceded in death by her parents Theodore and Grace Lemke; grandchildren, Robert and Elizabeth; and brother, Howard Lemke.

There will be a visitation one hour prior to service at the church on Tuesday.

Funeral Services celebrating the life of Eleanore Irene Miller will be 11 AM, Tuesday February 11, 2014 at the Resurrection Lutheran Church in St. Joseph.

My condolences to the Miller family. “If a man die, shall he live again?” asked Job long ago. How would you feel if you knew a reunion with your loved ones was possible right here on earth under the best conditions? Well, the Bible makes the promise: “Your dead ones will live…They will rise up” (Isaiah. 26:19) The Bible also says: “The righteous themselves will possess the earth and reside forever upon it.” May you find comfort knowing you may see your loved one again.

Our thoughts and prayers are with you. Eleanor held a special place in my heart. We were members of the same bible study for a time and I feel very privileged that she entrusted me with cuttings of some of her special plants!