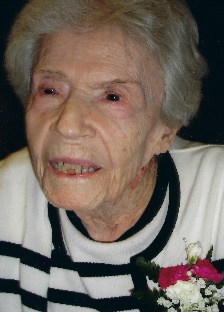 Edna Marie Mayer Sweet passed into Eternal Life August 19, 2019 at 103 years 3 months 1 day. In loving memory of Edna, there will be a Mass of Christian Burial at 11:00AM Thursday, August 22, at St. Luke’s Catholic Church in Clearwater, MN. Friends may gather from 10:00-11:00AM at the church in Clearwater.

Edna Marie was born May 18, 1916 in the “brick house” adjoining the Mayer Grocery Store (now Club Almar) in St. Augusta, MN, as were her five siblings. She was the third child of John and Catherine (Meyer) Mayer. Edna received her childhood sacraments at St. Mary Help of Christian church in St. Augusta-the church her grandfathers help construct. Edna attended grades 1-8th at St. Mary Help of Christian School in St. Augusta. She attended the 9th grade 1930-1931 at Cathedral High School in St. Cloud and later one year at the St. Cloud Business College. Edna’s first job was at the Breen Hotel in St. Cloud, MN in A/1937. The summer before business college she was a nanny for her best friend, Esther Krebs, sister’s family, Adeline and Paul Bautch. The family moved to Redmond, Washington, in A/1940 and invited Edna to move there too. She worked at the Lake Washington Engineering Plant in Redmond, Washington in A/1942. She met Ellsworth “Al” Sweet when he was stationed in Seattle, Washington, in the “Rainbow Division” of the Army. They were united in marriage January 21, 1944, Chapel in the Pines, Fort Lawton, Washington. After the war they moved to Al’s hometown, Lincoln Park, Michigan. In Lincoln Park she was employed at the Truan’s Candy Store from A/1950 until Truan’s closed in 1991, retiring at age 75. In October 2007 she moved to St. Benedict Village in St. Cloud, MN and in January 2013 to their Nursing Home. In March 2014, she moved to Annandale Nursing Home where she resided at the time of her death.

In loving memory of Edna, there will be a Mass of Christian Burial at 11:00AM Thursday, August 22, at St. Luke’s Catholic Church in Clearwater, MN.