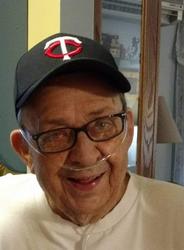 Earl Mewes, 86, died peacefully at home, surrounded by his wife and daughters, on Sunday, July 9, 2017, after a long and courageous battle with pulmonary fibrosis and congestive heart failure.

Earl was born on August 1, 1930, in Clayton, WI, to Fred C. Mewes and Florence (Huberty) Mewes. The family lived and worked on a dairy farm in rural Clayton, WI. Earl graduated from Clayton High School in 1948 and subsequently attended business college in Minneapolis, MN. He worked as a bookkeeper for a short time in Minneapolis before returning home to Wisconsin, where he became a bartender. He moved to St. Cloud, MN, in 1955 and worked as a bartender at several establishments in the St. Cloud area. He then attended St. Cloud State University, earning a Bachelor’s Degree in Business Education in 1964. His education was paid for by his own efforts and not by the government. He worked as a business education teacher at Clarissa High School from 1964 to 1966, where he met his bride, Claudia (Paulson) Mewes. They were married on June 4, 1966, in Bemidji, MN. Earl taught for 2 years at Big Lake High School before settling with his young family in Albany, MN to teach for the Albany Area Schools beginning in 1968.

Earl was a great teacher who positively influenced generations of students in the Albany area. He served as a strong union leader amongst his peers and was instrumental in starting the Albany Area local chapter of the Minnesota Federation of Teachers. Earl tirelessly represented his colleagues as president and lead negotiator for the teachers’ union and continued to serve as a mentor and trusted advisor to fellow teachers until his retirement in 1992. Earl thoroughly enjoyed his leisure time in retirement. He loved fishing, cooking, reading, following politics, and bird watching. He was a proud Democrat and an avid fan of the Minnesota Twins.

A celebration of Earls life will be held on Friday, July 21, beginning at 3 p.m. at the North Park (Hospital Park) in Albany. Dress is casual, and celebrants are encouraged to wear their favorite Minnesota Twins gear.

Small in stature, great in everything else. Loved by all who knew him. Bye Earl.