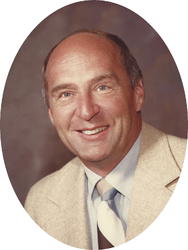 Donald was born on December 19, 1931 to Albert and Evelyn (Erickson) Ritchie in Rockford, IL.  He grew up with his brother John and graduated from Rockford High School in 1949.  After graduation, he moved to Wisconsin, where he earned his Bachelor’s Degree.  Education was important to him and brought him back to Illinois where he completed four years of medical school before entering the military.  Don served with the United States Army from 1957-1960 as a flight surgeon.  He completed two active duty internships and was selected for the Nikita Khrushchev Mission.  From 1960-1964 he was doing post-grad OB/GYN work in Nebraska.  Don moved to St. Cloud in 1964 and began working at the Women and Children’s Medical Center as an OB/GYN.  He was a pioneer in his field and was the first physician to travel to Canada for training on amniocenteses and in 1965 he performed the first successful intrauterine blood transfusion in the Midwest.  Don worked hard to bring the YMCA to St. Cloud, he would arm wrestle for donations, and was the first president.  He felt it was his legacy.  Don was a board member and actively involved in Make-A-Wish at both the state and national levels.  Over his career, Don took 15 trips to Guatemala with the HELPS Organization bringing surgical and medical help to people in need.  Don was very athletic, had participated in football and wrestling in high school, and enjoyed attending grandkids’ sporting events.  His first love was nature and he was a decorated Eagle Scout.  He enjoyed being outdoors and gardening.  Don lived for his dogs and had rescued many animals over the years.  He liked a variety of music, but Elvis’ gospel music was a favorite.  Don was man of solid faith who loved his relationship with his Holy Father and Jesus and was an active member of Harvest Church in Sauk Rapids.  He will be remembered fondly by the many people he touched over his lifetime.

He is preceded in death by his parents Albert and Evelyn Ritchie and his brother John Ritchie.

Don’s family would like to extend a heartfelt thank you to Home Instead for taking such great care of him.

There will be a visitation for family and friends after 9:00 AM on Monday, December 7, 2015 at Harvest Fellowship Church in Sauk Rapids.