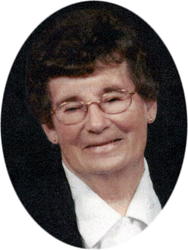 Mass of Christian Burial celebrating the life of Dorothy A. Bloch, age 85, of Albany, will be at 11:00 AM on Tuesday, April 21, 2015 at Sacred Heart Catholic Church in Freeport.  Father Roger Klassen, OSB will officiate and after a luncheon there will be a burial at Seven Dolors Parish Cemetery in Albany.  Dorothy passed away peacefully early Saturday morning.  There will be a visitation from 4:00-8:00 PM on Monday, April 20, 2015 and again after 10:00 AM until the time of service Tuesday at the funeral home in Albany.  Parish prayers will be at 5:00 PM Monday evening at the funeral home.  Arrangements are being made with the Miller-Carlin Funeral Home, Albany.

Dorothy was born on July 1, 1929 in St. Anthony to Martin and Anna (Eiynk) Heinen.  She grew up attending the local school and was raised alongside 11 siblings.  In 1952 she married David Schiffler in St. Anthony and together they had a daughter, Mary Kay.  After he passed away, Dorothy remarried Lawrence Bloch on July 6, 1979 in Melrose.  She was a farm wife who enjoyed gardening, fishing, cooking, and baking.  For 18 years, she was her mother-in-law’s caretaker and she also worked in St. Cloud at Vision Ease.  Dorothy liked playing cards, going to auctions with husband Lawrence and close friend Rita Groetsch, visiting with friends, and traveling.  She visited Rome with Lawrence and was able to shake the Pope’s hand.  Dorothy also loved the time she spent with her grandchildren.  She was a member of Sacred Heart Catholic Church in Freeport, Christian Mothers, Catholic Aid, and the Mission Quilting Group in Albany.

She is preceded in death by her parents Martin and Anna Heinen, her first husband David Schiffler in 1973, her second husband Lawrence Bloch in 2007, her daughter Mary Kay Engelmeyer in February of 2012, her brother Norbert Heinen, and her sister and brother-in-law Margaret and Louis Chock.