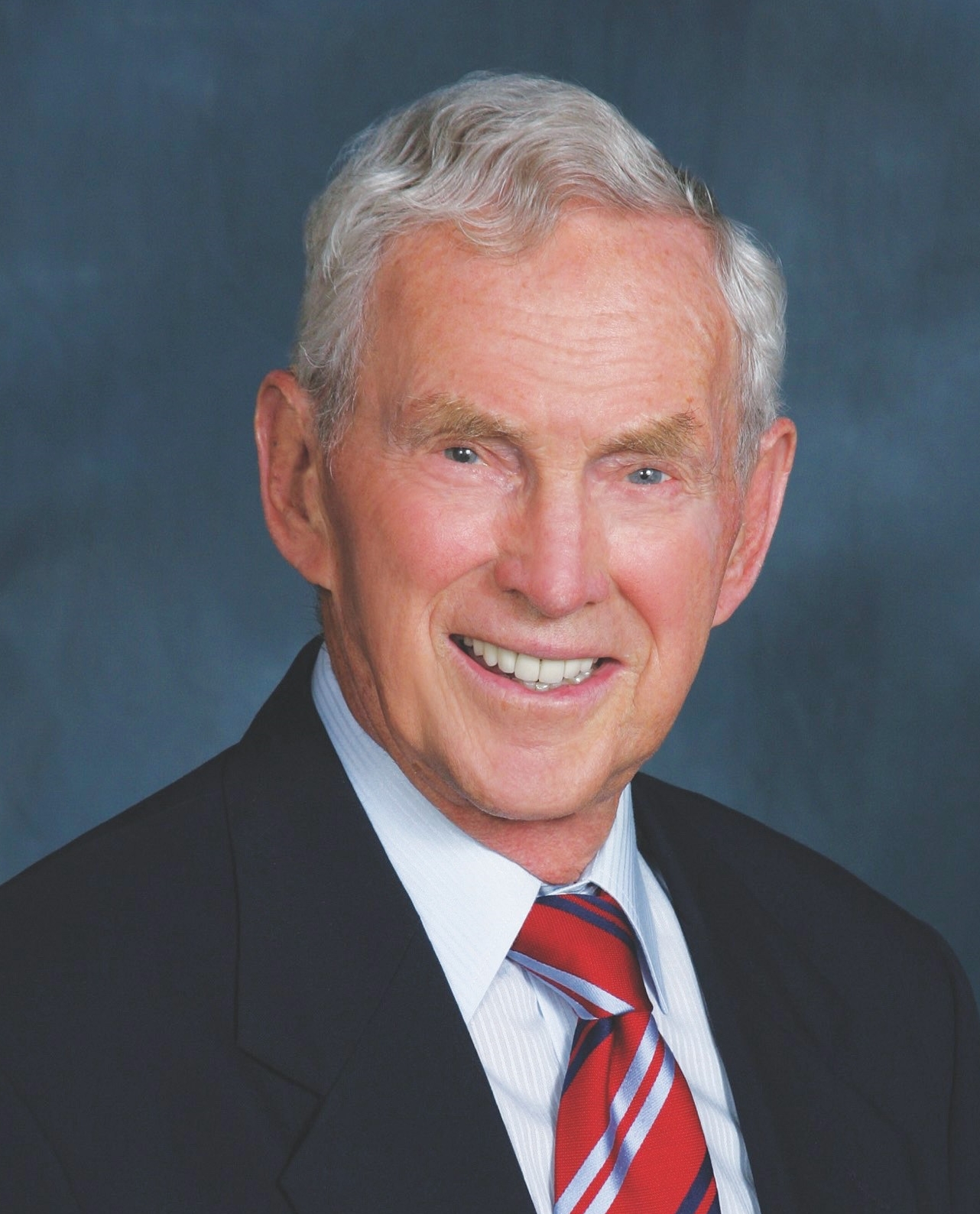 Donald “Don” Penfield Helgeson passed away, peacefully, while seated at his desk, the afternoon of Wednesday, April 20, 2022, at his seasonal home shared with wife, Sue Shepard, on Longboat Key, FL. Born in St. Cloud on December 27, 1927, to Mabel (Nelson) and Elmer Martin, “E.M., Mike” Helgeson, Don had a life filled with abundance, adventure, and enterprise. He was known for his love of family, intellectual curiosity, travel, community support, leadership, and the positive impact he made through his family’s chicken and banking businesses, Gold’n Plump Poultry and Liberty Bank.

Don was a lifelong resident of the St. Cloud area. His childhood home was on the banks of the Mississippi River, with brother, Jerry, and sister, Carol. His parents thought it important for Don to see a world outside his own and exposed him to other people and cultures during two, six-week road trips. These included Florida and along the new Pan-American Highway to Mexico, at ages 10 and 13.

After graduating from St. Cloud Tech High School in 1945, Don signed-on as a deck hand on a Great Lakes steamboat, where he shoveled coal. In 1946, he enlisted in the U.S. Army for two years before attending Macalester College. There, Don played football, studied economics and history, and took poultry science classes at the University of Minnesota to prepare for work in his family’s hatchery business. Upon graduation, Don returned to St. Cloud with his new wife, Arlene Mittelstadt, to put down roots, in 1951.

Don had a vision of turning his dad’s seasonal hatchery business into a year-round broiler chicken operation. In 1955, he, along with his brother, Jerry, purchased Jack Frost from their father. The company grew and changed significantly over the years to become the leading chicken provider in the Midwest. Under his leadership, Don often reflected on the caring culture created for its many employees, partners, farmers, and charities. Customers and consumers, alike, appreciated the quality of its offerings and clever marketing campaigns that made the Gold’n Plump and Just BARE Chicken brands household names.

Don and Jerry purchased Liberty Bank from their father in 1975, which E.M. had founded in 1934 to help farmers finance Jack Frost chicks. The bank had since grown and expanded into the mortgage business to become one of the most highly rated, respected, regional banks in the country. Liberty was sold in 2010, and Don continued his work on the board until his passing. He loved monthly board meetings, where he reviewed financials and discussed business strategy; and he was quick to praise those who had made the bank successful.

Don and Arlene were both hands-on when they built their forever home on the banks of the Mississippi in rural Sartell, in 1957. Together for 55 years, they raised four sons and hosted frequent gatherings, chicken barbeques, water sports, ice skating, and tennis.

Don and Arlene also enjoyed get togethers at Val Helga, the family’s cabin in the woods. In addition to many domestic family trips, they took more than 100 overseas trips, which included adventure travel. A special highlight were many helicopter ski trips to the Bugaboos in Canada.

Parallel to many business achievements, Don felt strongly about giving back to his community through time and talent. He represented the ninth district on the Federal Reserve Bank board of directors from 1976 to 1981. Don served for 16 years on the Hamline University board of directors. Locally, he was actively involved in the Downtown Association in St. Cloud, where he donated and raised funds for the Norwest Bank Center, St. Cloud River’s Edge Convention Center, and the restoration of the historic Paramount Theatre. Don also helped launch the local United Way chapter, for which he remained active throughout the years.

After Arlene’s death in 2005, Don found love for a second time, and he married Sue Shepard. The pair had crossed paths while biking with a group, along the Danube, in 1995. Together, their love of travel, the arts, and importance of family made them true life partners. Since their marriage in 2007, the couple had continued a legacy of the arts, community involvement, and socializing with friends and family.

Over the last several years, Don had captured the people, events, experiences, and underlying values of his remarkable 94-year life in a biography entitled GRATITUDE, published in November 2021. In this work, Don refers to his guideposts for life as, “to love, to know, to experience.”

To those who knew him, Don was a man of strong convictions, yet humble. He embodied tenacity, integrity, and an insatiable curiosity. He strived to balance his work and personal lives as husband, father, and grandfather.  Don leaves behind a roadmap and genuine example of how to best live a good, meaningful, fulfilled life.

Friends and family may honor Don through visitation from 4-7 p.m. at Miller-Carlin Funeral Home in St. Cloud on Friday, June 3 and at 1 p.m. on June 4 at First United Methodist Church in Sartell, with a Celebration of Life service to follow at 2:00 p.m. (with the option to attend virtually at www.lovefirstumc.org). In lieu of flowers, a gift may be sent to the Great River Children’s Museum or PLANT-A-TREE, Superior National Forest, contact: [email protected]

Friends and family may honor Don through visitation from 4-7 p.m. at Miller-Carlin Funeral Home in St. Cloud on Friday, June 3 and at 1 p.m. on June 4 at First United Methodist Church in Sartell, with a Celebration of Life service to follow at 2:00 p.m. (with the option to attend virtually at www.lovefirstumc.org). In lieu of flowers, a gift may be sent to the Great River Children’s Museum or PLANT-A-TREE, Superior National Forest, contact: [email protected]

A gift may be sent to the Great River Children’s Museum or PLANT-A-TREE, Superior National Forest, contact: [email protected]

Please click this link to view a playlist of the life of Donald “Don” Penfield Helgeson.

Friends and family may honor Don through visitation from 4-7 p.m. at Miller-Carlin Funeral Home in St. Cloud on Friday, June 3.

Friends and family may honor Don through visitation at 1 p.m. on June 4 at First United Methodist Church in Sartell, with a Celebration of Life service to follow at 2:00 p.m. (with the option to attend virtually at www.lovefirstumc.org).

What a gift Don was, certainly to his family, but also the whole community. I was one of the lucky ones who got to work side by side with this generous, dedicated, considerate, courageous, kind and happy man who, among many initiatives stepped forward to ensure the renovation of the Paramount Theatre. His leadership and friendship touched so many lives and his example guided so many toward healthy, positive outcomes. He never gave up and will inspire those of us, who were lucky to know him, for many years to come. Condolences to Sue, his children and families, neighbors, friends and associates, Marj and Garry Hawkins