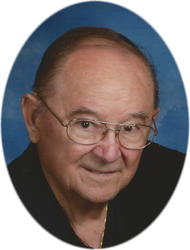 Donald Swedziak, age 89, passed away Friday, September 11, 2015 at the St. Cloud Hospital with his family at his side. A Mass of Christian Burial will be held at Our Lady of Mount Carmel Catholic Church in Opole, MN on Tuesday, September 15, 2015 at 10:30AM. Burial will take place in the parish Cemetery. Visitation will be held at the church in Opole on Monday, September 14, 2015 from 4PM-7PM and one hour before Mass on Tuesday. Our Lady of Mount Carmel parish prayers will be at 5:00 PM on Monday at the church. Arrangements are being made with the Miller-Carlin Funeral Home, Holdingford, MN.

Donald Martin Swedziak was born in Morrill, MN on May 2, 1926, the fifth of six children born to Joseph and Rose (Ritzko) Swedziak. He grew up on the family farm, attended grade school in a one-room schoolhouse and graduated, Class of 1944, from Foley High School where he played football for the Foley Falcons. He then served with the United States Army before returning to the family farm to work with his father.

He married the love of his life, Bernadette “Betty” Ann Smelter on June 13, 1950 and recently celebrated 65 blessed years of marriage. Two years on the farm, then off to St. Paul, MN where he worked as a butcher before beginning a 36 year career with the Waldorf Paper Company as both a machinist and supervisor of maintenance. Retiring in 1988, he enjoyed hunting, fishing, traveling as snowbirds and his favorite pastime; playing cards. Don was never too far from a cribbage board and would not turn down a game of Texas Hold’em which he played weekly with family and good friends. Don was a member and former trustee of Our Lady of Mount Carmel parish, St. Michael parish of St. Cloud, the Eagles Club, the Waite Park Silver Star Post 428 American Legion and past member of the Holdingford Sportsman’s Club.

Donald, a man of deep faith and integrity will be remembered for his love of God and family, his kindness and generosity and a great and daring sense of humor. His family and friends rejoice in faith that he is now reunited with his sons and his Savior, Jesus Christ.

A Mass of Christian Burial will be at 10:30AM on Tuesday, September 15, 2015. Burial will follow in the parish cemetery.

Im so sorry for your loss. Know my thoughts and prayers are with you and your family. Sending hugs to you. Love you all!!!

Rest in peace Uncle Donald.  You will be missed by MANY!  I know his boys, and siblings welcomed him with open arms and the cards dealt on the table.  Love to ALL!

I am sending you prayers and hugs! I loved Uncle Donald and each time I saw him was a blessing! He was a role model to many and his humor and faith in God are two that I can model to continue his legacy! I know he is celebrating with his family in heaven and in that I can thank God!  And remember to hold close to God for comfort; Philippians 4:13-“I can do all things Christ who gives me strength.”