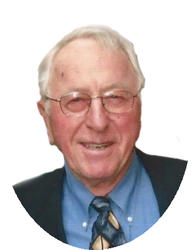 The Mass of Christian Burial, celebrating the life of Donald C. Brever, age 89, of Albany will be 11:00 AM, Tuesday, September 13 at the Seven Dolors Catholic Church in Albany.  Burial will be in the parish cemetery.  Don passed away peacefully on Tuesday, September 6, 2016.  There will be a visitation from 4-7:00 PM, Monday, September 12 and again after 10:00 AM Tuesday at the church in Albany.  Seven Dolors Parish Prayers will be at 4:00 PM, Monday at the church.  Arrangements are being made by the Miller-Carlin Funeral Homes.

Don was born July 11, 1927, in Long Prairie, MN, the only child of Ed and Caroline (Spieker) Brever.  Prior to beginning his profession as a teacher, Don honorably served in the U.S. Army and was stationed in Heidelberg, Germany at the end of WWII.  Upon his discharge, he attended St. Cloud State Teacher’s College where he earned a degree in Industrial arts. He married Darlene Rehkamp in 1947, she predeceased him in 1994.  He married Rosemary Kessler in 1997.  Don began his teaching career in Haines, Alaska, before continuing at Upsala and retiring with the Albany Area Schools.  In addition to his Industrial Arts classes, he coached football, basketball, track and field, and cross country.  He was an advocate for the hard-working underdog; he was their biggest cheerleader and remembered well all of his teams and players.  Even when dementia caused his loss of memory of recent events, the memories of his athletic teams was fresh in his mind.  Don retired from teaching in 1984 and was fortunate to spend many great years of retirement wintering in Arizona.  Don was an amazing woodworker who designed and produced intricately-patterned jewelry from exotic woods; he created jewelry that is both amazing and remarkable. He retained his humor and good nature to the end.  Don was a member of Seven Dolors Catholic Church, the Albany American Legion Post and the Seven Dolors Knights of Columbus.

Don is preceded in death by his parents and his first wife, Darlene.

The family wishes to express their sincere appreciation to his home caregivers (Ruth, Marian,  Agnes and Cyrilla), to the staff of Mother of Mercy, to the hospice staff, and to his personal physician, Nate Brever, for their compassionate and devoted care.  Don was the luckiest man in the world, having two wives that loved him deeply. His family is lucky to have gained so many wonderful memories.  All of his grandchildren will remember “when the wind is from the west, fishing is best; when the wind is from the east, fishing is least.  On behalf of Don you may make a contribution, in lieu of flowers, to the Don Brever Scholarship at the Albany High School.

On behalf of Don you may make a contribution, in lieu of flowers, to the Don Brever Scholarship at the Albany High School.

I am so sorry to read that your father has passed away.   I know it’s part of life, but that doesn’t make it any easier.   No matter what the circumstances, it still leaves a hole in your heart!   I have such fond memories of your Dad and mother as we were all growing up in Albany!   I hope their memories of us and the fun we all had, were fond as well!  I wish I lived close enough to be able to be there to celebrate his life with you.  I’m sending hugs to you all!

Rosemary, Nancy and Tom and Families:   My deepest sympathy to you at Don’s passing.  He was loved by everyone who had the privilege to know him well.   My memories of him go way back to when my family moved to Albany in 1969.  He became one of my dad’s closest and dearest friends.  He was ours also.  Rosemary, I will miss our Palm Shadows continuing memories, but will fondly cherish all those I have.   Love to all of you, and God Bless You.  You are in my prayers,