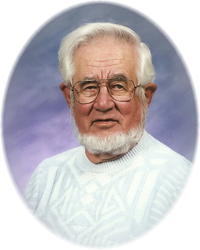 Memorial Services celebrating the life of Donald Urses Weiler, age 87 of St. Cloud will be 7 PM, Friday March 4, 2011 at the Miller-Carlin Funeral Chapel in St. Cloud.  Father Richard McGuire will officiate and burial will take place at the Minnesota State Veterans Cemetery at a later date.  Don died at the VA Medical Center early Tuesday morning surrounded by his family.  Friends may call from 4 PM until the time of the service on Friday, March 4, 2011.  Arrangements are being made with the Miller-Carlin Funeral Home in St. CloudDon was born July 12, 1923 to Nicholas and Susan (Kramer) Weiler in St. Cloud.  After serving his time in the 34th “Red Bull” Division of the Army in North Africa and Italy he met his future wife, Ruth, in Iowa while recovering from injuries sustained in the battle of Mount Cassino.   Don married Thelma “Ruth” Lair on January 27, 1945.  Don lived his entire life in St. Cloud.  He had a true love for the outdoors where he enjoyed camping, fishing, and traveling.  He had a long career as a service technician at the Typewriter Shop and later retired as a sales representative at Marco Business Products.  Don had a lighthearted humor with friends and family often with running jokes lasting for years.  As a recipient of the Purple Heart, Don had a compassion for his fellow brothers-in-arms at the St. Cloud VA Medical Center and became a devoted member and officer of the Military order of the Purple Heart.Don is survived by his children Ken (Rosie) Weiler, Plymouth; Mike (Patricia) Weiler, Atascadero, CA; Terri Weiler, St. Cloud; Toni Weiler, St. Joseph; his brother Leonard (Gen) Weiler, Sioux Falls; his grandchildren Mike Weiler, Jeff (Marcella) Weiler, Nikki (Brendan) Weiler, Matt Finneman, Zack Weiler, and Michelle (Scott) Archer, and his 4 great-grandchildren Jacob Archer, Noelle Weiler, Lilli Archer and Vincent Finneman.  He will be greatly missed.He is preceded in death by his wife (his love) Ruth Weiler, his parents Nick and Susie Weiler and his siblings Norbert Weiler, Bertha Kunkel, Theresa Weiler, Regina Illies, infant brother Raimund Weiler, and infant granddaughter Mary Weiler.In lieu of flowers, memorials are preferred to the Military Order of the Purple Heart local chapter #308; contact number (320) 271-0054A heartfelt thank you is extended from the Weiler family to the staff at the St. Cloud VA Medical Center for their loving and exceptional care of Dad since 2008.

Dear Ken, Mike, Terri, Toni, and families, I am so sorry to hear of your loss of your dad and grand dad. I am ill at the moment and the Dr. said i cannot travel. I will miss my uncle Don greatly and his humor. I also remember how deeply in love Don and Ruth were, what a blessing that was to see them so in love with each other. I will miss them both.

Are family is so sorry to hear of your loss. We have so many memories from our families summers together. Norbert will be waiting for him. I hope they don’t start a fight.

I’m so sorry to hear of the passing of Uncle Don. We will not be able to make it on Friday due to we are still in AZ.
We are working on moving back to MN. We will have to get together when we get back. Our love and prayers to all of you.

On behalf of the Military order of the Purple Heart – St. Cloud Chapter #308, we would like to offer our condolences to the friends and family of Don. He was a very active member and will be missed.