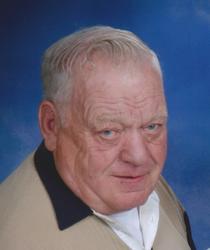 The Mass of Christian Burial, celebrating the life of Dennis R. Barton, age 75 of Bowlus, will be 10:30 AM, Wednesday, February 1 at St. Stanislaus-Kostka Catholic Church in Bowlus.  Burial will be in the parish cemetery.  Dennis died unexpectedly Saturday, January 28, 2017,  at his home.  There will be a visitation from 4-8:00 PM Tuesday and again after 9:30 AM Wednesday at the church in Bowlus.  Parish prayers will be at 5:30 PM Tuesday at the church.  Arrangements are being made by the Miller-Carlin Funeral Homes.

Dennis was born September 4, 1941 in Two Rivers Township to Roman and Ursula (Lempke) Barton.  He married Evelyn Kalis on October 13, 1964.  He farmed and was a milk hauler.  He also worked as a roofer building chicken barns. He enjoyed fishing, hunting, playing cards and spending time with family and friends.  He was a member of the St. Stanislaus-Kostka Catholic Church in Bowlus.

Dennis is preceded in death by his parents and his son, Brian Barton.

10:30 AM onWednesday, February 1, 2017 at St. Stanislaus-Kostka Catholic Church in Bowlus.

Karen and family;  I was so saddended to hear of your loss. He is with our Savior and one day we will all be together again as God has promised.  Keep the memories in your heart and share the good times.  We never know when God calls us home. It has been 6 years since the loss of my dad, seems like yesterday.  Know only that God has plans for all of us and we will grieve the loss, but rejoice that he is in heaven.  He will watch over all of his loved ones.  May God grant you peace and comfort in the days to come.  God bless you all.  Deepest sympathy’s.  Jackie, Jay and family.