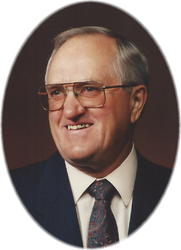 A memorial service for Delroy Charles Behrend, age 85 of St. Cloud, will be at the City of Sauk Rapids Community Hall, 250 Summit Ave. North, Sauk Rapids. Visitation will be on April 30, 2014 at 9:30 AM with a service to follow at 11AM at the same location. Delroy died on April 24, 2014 peacefully surrounded by his family.Delroy Charles Behrend was born on July 29, 1928 in St. Cloud to Herman and Sophie Behrend. He lived on the family farm in Popple Creek through his early adult years. This is also where he met the love of his life Iris V. Studenski and they were married on October 17, 1948. Together they moved to St. Cloud and  raised their family of seven children. Iris and Delroy were married for 65 years, until Iris passed away six months ago. Delroy was heartbroken, yet he still showed great strength and courage to fight his painful battle with cancer, having his family by his side. Dad it was time for you to go, your battle is over now, no more tears flow down your cheeks, no more pain, no more suffering and now you no longer feel weak.Delroy was employed as a Locomotive Engineer on the Great Northern / Burlington Northern Railroad for over 40 years and retired in 1990.Delroy had a joyful heart and kind humble spirit. When greeting someone he would always have a loving smile and a twinkle in his big blue eyes. He might even take time to tell you a short story or joke. His children hold on to many fond memories of camping and traveling together as they grew up. Delroy had a strong, steadfast faith and love for Jehovah, which he would openly share with others. He was an active and dedicated member of Jehovah’s Witnesses for over 50 years. Delroy spoke often to his family and friends about his dedicated faith and his joy to once again see Iris on the paradise earth. He enjoyed gardening, grilling, golfing, playing cards, reading his bible, feeding birds and dancing the polka with Iris. Delroy played many roles in his life, being a devoted husband, father, grandfather and great grandfather and he will be truly missed by all. Delroy lived for those he loved, and those he loved will never forget him.Delroy is survived by his seven loving children; Phyllis (Dale) Olson, Waite Park; Barbara (John) Kiffmeyer, St. Cloud; Douglas Behrend, Sartell; Deborah (Greg Jarrett) Behrend, St. Cloud; Kevin Behrend, St. Anna; Vicky (John) Rozycki, Pleasant Lake; Wanda (Kevin) Lutz, St. Cloud; ten  grandchildren and two great-grandchildren; his siblings, Donna Mae Marklowitz, St. Paul; Arthur (Dorothy) Behrendt, St. Paul; Valery Behrendt, Sauk Rapids.He is preceded in death by his wife Iris V. Behrend, his parents Herman and Sophie, and his siblings, Clifford, Herbert, Marvin  Behrendt, and one grandchild, Corney Olson.With grateful hearts, the family wishes to extend a sincere thanks to all who cared for Delroy with compassion and love at Talahi’s Natures  Point. We wish to give a special thank you to Deb Ritter and Jan Johnson, along with the entire staff from the St. Cloud Hospice Program for their love. Our family could not have taken care of both our mother and father without Hospice helping us, with their extreme love and total caring commitment. Arrangements are being entrusted to the Miller-Carlin Funeral home.Memorials may be given to the donor’s choice.

Memorials may be given to the donors choice.

Delroy was an example of humility and kindness. We loved him.

Delroy was always kind and loving. I also enjoyed his parts on the service meeting. He will be missed.