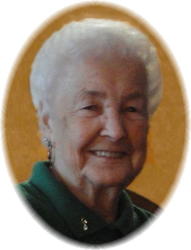 The Mass of Christian Burial, celebrating the life of Delphine Super, age 90 of Avon, will be 11:00AM, Saturday October, 6th at St. Benedicts Catholic Church in Avon. Delphine passed away peacefully Tuesday night at the Mother of Mercy Nursing Home in Albany.  There will be a visitation at 10:00AM Saturday at the church in Avon.  Arrangements are being made by the Miller-Carlin-Brenny Funeral Home in Albany.Delphine was born August 23, 1922 in St. Joseph to Joseph and Margaret (Weyland) Reber. She married Urban Grunloh on April 17th, 1944 in St. Joseph. Urban later passed away in 1966. She then met Simon Super and they were married July 31, 1971.Delphine was a homemaker and raised 7 children. She was a member of Christian Mothers and Legion Auxiliary #428.Delphine is survived by her children; Barbara (Rodney) Wolf, Avon, MN; Carol (Herb) Mader, Albany, MN; James (Mary) Grunloh, Avon, MN; Patrick (Cindi) Grunloh, Avon, MN; John (Cindy) Grunloh, Lester Prairie, MN; 10 Grandchildren, 6 Great-Grandchildren and 1 Great-Great-Grandchild. She is also survived by her brother Elmer (Lorene) Reber, St. Joseph, MN; sister, Valeria Roeder, St. Joseph, MN and sister in-law Marge Reber.She is preceded in death by her parents, husbands, Urban Grunloh and Simon Super. Her sons Donald and Ronald Grunloh, brothers, Gary, Harold, Roman, Donald Reber and sister, Dorothy Marthaler.

There will be a visitation at 10:00AM Saturday at the church in Avon.

Del was a gem of a person. I have many fond memories of her. I was so blessed to have gotten to see her recently. She was still the same Del, bright, happy, fashionable, and only a bit shorter! Please accept my condolences on the loss of such a special person.