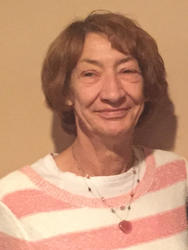 Deborah was born March 22, 1953 in Minneapolis, MN to Otto and Delores (Burns) Hagen.  She graduated from Rockford High School in 1971. Deborah was united in marriage to Edward Ehrlichman on May 11, 1985, at St Thomas the Apostle Catholic Church in Corcoran, MN. Deborah worked as a care assistant for Albany Home Care and Catholic Charities retiring in 2001.  Deborah enjoyed singing and dancing, gardening, baking and spending time with her family especially the grandchildren.  Deborah was a member of St Hedwig Catholic Church in Holdingford.

She is preceded in death by her parents, brothers, Tim, Greg, and Kevin, sisters Delores, and Dorinda, brother in law Dale Patnode, and Niece Jenny Hagen.

In lieu of flowers memorials are preferred.

Visitation will be from 9:30 10:30 AM on Friday, March 23 at St. Hedwig Catholic Church in Holdingford. Arrangements are being made by the Miller Carlin Funeral Homes.

Mass of Christian Burial, celebrating the life of Deborah O. Ehrlichman, age 64 of Holdingford, will be 10:30 AM, Friday, March 23 at St Hedwig Catholic Church in Holdingford. Inurnment will be at a later date.

My memories of Deb are too many to write. I just wanted to say that even though I didn’t see her as often as I should have I loved her very much and will miss her deeply.