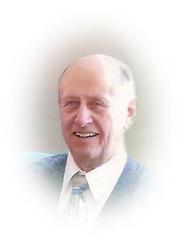 DANIEL M. DONABAUERJanuary 10, 1928 – September 14, 2009Services celebrating the life of Daniel Donabauer, age 81 of Kimball will be at 11:00 AM Thursday, September 17 at the Miller-Carlin Funeral Home Chapel in St. Cloud. Danny died Monday at his home surrounded by his family. There will be a visitation from 4-8:00 PM Wednesday and again after 10:00 AM Thursday at the funeral home in St. Cloud. Parish prayers will be at 7:00 PM Wednesday at the Funeral Home in St. Cloud.Danny was born January 10, 1928 in St. Joseph to Leopold and Margaretha (Reisinger) Donabauer. He grew up in St. Joseph and entered the U.S. Army in 1950, where he served in Company B, 511th Airborne Infantry Regiment. He was honorably discharged in 1952 and he lived in Rhode Island for a short time. He returned to Central Minnesota and married Ramona Skaja on June 11, 1955 at St. Joseph’s Catholic Church in Waite Park. The couple lived in Waite Park and St. Cloud before moving to Kimball in 1977. Danny was a well driller, he was self employed with Jack Fischer Well Drilling and then he worked with his son-in-law at Rollie Werner Well Drilling. Danny was active at his job until he became to ill to work. He was a member of Holy Cross Catholic Church in Marty and theAmerican Legion 0026.Danny is survived by his wife, Mona Donabauer, Kimball; his children, Stephen (Jeanne) Donabauer, St. Cloud; Keith (Joyce) Donabauer, St. Augusta; Shelly (Frank) Krippner, Kimball and Mary (Rollie) Werner, Annandale. He is also survived by his brothers and sisters, Hildegard Schneider, Foley; Leo (Dorraine) Donabauer, Kimball; Rose Michalski, St. Augusta; Joan Wruck, St. Cloud; Tilly (Sylvester) Loeken, Kileen, TX and 12 grandchildren and 6 great-grandchildren.Danny is preceded in death by his parents and his brothers and sisters, Herman Donabauer, Alphonse Donabauer, Bernard Donabauer, Florian Donabauer, Valentine Donabauer, Gilbert Donabauer and Bertha Klein.

My thoughts and prayers are with you and your family at this time. I went to High School in Kimball with Mary, worked with Joyce at the Liquor Store Gib and Sharon owned. That’s how I knew Dan and his wife Mona. May Dan be at peace now and in no more pain, again sorry for your loss….Sincerely, Jean M. Och