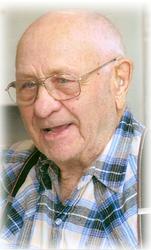 CYRIL T. MADER
February 4, 1922 – September 10, 2009 There will be a gathering of friends and family from 4-9:00 PM on Sunday, September 13h at the
Miller-Carlin-Brenny Funeral Home in Albany to celebrate the life of Cyril T. Mader, age 87 of
Freeport.  Cyril died Thursday at the Country Manor Health Care Center in Sartell.  Private
funeral services will be held at a later date.  Burial will be in the Upsala Memorial Cemetery. Cyril was born February 4, 1922 in Krain Township to the late Thomas and Ida (Vos) Mader.  He
grew up on the family farm and served in the U.S. Army, 10th Mountain Division in Italy from
May of 1943 until he was honorably discharged in December of 1945.  He married Violet
Wenderski on October 2, 1945 in St. Anna, MN.  The couple farmed together near St. Francis all
of their lives.  They were married 52 ½ years.  Cyril is a member of the Holdingford American
Legion. Cyril is survived by his daughters, Sharon (Richard) Tschida, Albany; Gail (James) Cherne,
Freeport; Joan (Dennis) Anderson, Anoka; and sons, Kevin Mader and Dwayne Mader, Freeport;
Lyle (Linda) Mader, Freeport; Timothy (Marilyn) Mader, Sartell.  He is also survived by 21
grandchildren and 9 great-grandchildren. Cyril is preceded in death by his parents, his wife, Violet on August 8, 1997 and his brothers and
sisters, Elvira Harren, Ralph Mader, Earl Mader, Delphine Atkinson and Floyd Mader.