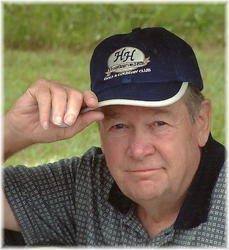 Memorial Services celebrating the life of Charles J. Hiivala, age 78, of Sauk Rapids will be from 1-3PM with a time for sharing starting at 3PM  on Saturday, January, 14, 2012 at the Miller-Carlin Funeral Home in St. Cloud.  Charles died peacefully Tuesday evening surrounded by his family at the Good Shepherd Nursing Home in Sauk Rapids.  Arrangements are being made with the Miller-Carlin Funeral Home 3013 Roosevelt Road, St. Cloud MN.Charles was born February 4, 1933 in Minneapolis to Charles and Esther (Peterson) Hiivala.  He grew up in Minneapolis and lived throughout Minnesota in such cities as Fairmont and Alexandria before settling in St. Cloud.  He married the love of his life Florence Meade on May 31, 1952 in Minneapolis.  He worked as a salesman for Norhtland Electric Supply Company in Minneapolis.Charles is survived by his 7 sons and one daughter, Charles (Linda) Hiivala, Apple Valley; Steven (Julie) Hiivala, Sartell; Lori (Robert) McConnell, St. Cloud; Jeff (Tammy) Hiivala, St. Joseph; Bradley Hiivala, Seattle, WA; Bob (Kristi) Hiivala, Buffalo; Tom Hiivala, St. Cloud; Jason (Roxanne) Hiivala, Sauk Rapids; his sister Avalon Papesh , Sauk Rapids; his  24 grandchildren, 16  great-grandchildren, and his dear friend Eloise Rist.He is preceded in death by his mother and father Esther and Charles Hiivala, his wife Florence Hiivala who died in 2003, and his sister Muriel Perkins.

Memorial Services celebrating the life of Charles J. Hiivala, age 78, of Sauk Rapids will be from 1-3PM with a time for sharing starting at 3PM on Saturday, January, 14, 2012 at the Miller-Carlin Funeral Home in St. Cloud.

My sympathy to all in Chuck’s family. I grew up with Flossie and Buddy Meade, graduating in 1950 with Flossie. I believe Chuck graduated in 1951. My last contact was with Flossie, after a class reunion. We spent quite some time chatting at breakfast the next morning. Good memories all around. I hope you all have many great memories to hold in your hearts about your Dad and Mom. Peace, DJ

Please accept my sincere condolences for your loss. You can be assured that comfort and hope are found in the pages of the Bible. At Psalm 55:22 we are told: “Throw your burden upon Jehovah himself, and he himself will sustain you.”
(Daniel 12:2)