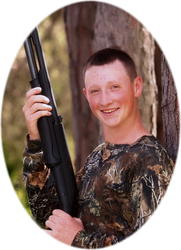 Mass of Christian burial celebrating the life of Brent Henry Lehnen, age 19 of Albany will be 11 AM, Tuesday, June 26, 2012 at Seven Dolors Catholic Church in Albany.  Father Michael Naughton O.S.B. will officiate and burial will take place in the parish cemetery following the service.  Brent died in a car accident in southern Minnesota Monday.  There will be a visitation from 4-9 PM Monday, June 25, 2012 at Seven Dolors Catholic Church and again from 10AM until the time of the service Tuesday morning again at the church.  Parish prayers will take place at 4:30PM Monday evening.  Arrangements are being made with the Miller-Carlin Funeral Home in Albany.Brent was born October 30th, 1992 to John and Rosanne (Feld) Lehnen in Albany.  He graduated from Albany High School in 2011 and had lived his life in St. Martin and Albany.  Brent worked for Klaphake Custom Harvesting for four years, Carstens Fiberglass, and most recently R-Way Pumping.  He was a member of Seven Dolors Catholic Church.  Brent had a strong love of the outdoors.  He was an avid sportsman enjoying activities such as hunting, fishing, snowmobiling, and four-wheeling.  He also loved every minute of his time with friends and family. This included his pointless driving trips in his truck, dancing, training his dog Yukon, and hanging out with close friends at “The Ranch”.  He also enjoyed every minute of his time working with his dad on his semi.  As a sportsman, he lived by the motto, “If it flies, it dies.  If it’s brown, it’s down.”Brent is survived by his parents John and Rosanne Lehnen, Albany; his sister Brenna Lehnen, Albany; his grandparents LeRoy Feld, St. Joseph; Eugene Lehnen, Paynesville; Emma Lehnen, Paynesville; many aunts, uncles, cousins, friends and his beloved dog Yukon.He is preceded in death by his grandma Beverly Feld, his great grandparents Luella Lehnen, Clarence Feld, Margaret Feld, Lillian Garding, Hank Goebel, his great aunt Betty Kilanowski, and his great uncle Patrick Dibblee.

There will be a visitation from 4-9 PM Monday, June 24, 2012 at Seven Dolors Catholic Church and again from 10AM until the time of the service Tuesday morning again at the church. Parish prayers will take place at 4:30PM Monday evening.

In lieu of flowers, memorials are preferred

I am so sorry for your loss. Brent was an adventurous young man who lived life to the fullest. God Bless.

thoughts and prayers go to your family, he was a good kid and will be missed

We send you our deepest sympathy. There can be no greater pain than losing a child. Our prayers go out to you. I will never forget how Brent would argue with me about Jeff Gordon being the best racer EVER! I cry through my tears remembering that. God Bless You!

So very sorry for your loss…We are keeping you in our Thoughts n Prayers.

Our deepest sympathy goes out to your entire family. We are so sorry for your loss. May memories and God’s hands hold you together during this difficult time. Please know you will be in our thoughts and prayers, along with many others that care about you and your family.

My thoughts and prayers are with your family during this difficult time. I pray for healing for you all.

My heart goes out to your family during this difficult time, i am praying for your family.

Although no words can really help to ease the loss you bear, just know that you are very close in every thought and prayer.

Were all going to miss u buddy love u alot man

Sorry to hear of your loss, John, Roseanne and Breanna. We will be keeping the Lehnen and Feld family in our prayers.

My deepest sympathy to you and your family. May you look to each other for strenght and to God who has a plan. My prayers are with you all. Randy and your Country Store friends.

Our thoughts and prayers are with you and your family John. We were so sorry to hear about Brent. Hopefully my sister Candy has welcomed him with open arms into heaven and is showing him a good time!

our thoughts and prayers go out to the family and friends who are going to miss Brent.

I’m so very sorry about your loss of Brent. May God bless you & your family with the strength you need as you go thru this very difficult time. You will be in my prayers and thoughts.

Dear Lehnen Family: Please accept my deepest condolences for the loss of your dearly beloved son, brother and grandson (Brent) during this most difficult time.May his entire family draw comfort from the promises made to us by our very loving Creator Jehovah God.In John 5:28,29 & Rev 21:3,4,5 he promises to bring Brent back to life in the resurrection right here on earth in the very near future and end all sickness,suffering and death forever.

Everyone misses you Buddy! I can’t believe that it has been 8 months as of today! You wouldn’t believe that till this day how many people you are still touching with every word and all ur action you did while you where still with us. I LOVE YOU && I MISS YOU every day.
Love your one && only Sister