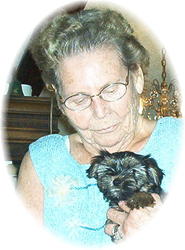 Bernadine N. Moorhouse passed away peacefully on September 16th.  Bernie was born to Edwin and Goldie Wilson on November 18th 1919 in Galesburg, Illinois.  She was their only child.

Bernie worked for Helene Curtis introducing the cold perm after graduating from cosmetology school in Chicago, Illinois.  She married and has two children, Lawrence Moorhouse of Clear Lake, MN and Walter Moorhouse of Richmond, MN.

Bernie also graduated from the Chicago school of Interior Decorating and later became a realtor/broker of Moorhouse Realty.

Bernie was active in the Shrine both Osman and Zuhrah Auxiliaries.  She was also active in the formation of the Clear Lake Lioness Club.

Bernadine was lucky to be blessed with 5 grandchildren: Shawn, Mark, Matt, Christian and David Moorhouse and 4 wonderful great grandchildren.

I have often thought about Bernie, wondering how she was, where was she.  Back in the 70s I worked for her.  Such a lovely lady.  I admired her so much.

My Sympathies to the. Moorehouse Families. Bernie was an interesting woman. & My Grandpa Henry Larson. Enjoyed working with Bernie also.

My heartfelt sympathies to your family. Bernie was a beautiful woman with an awesome sense of humor. I knew her well and I loved her. She was always so kind to me and I never forgot that. May she rest on Angels wings and shine her light on us. Rest In Peace Bernie!