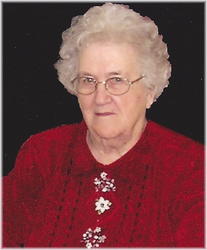 Mass of Christian Burial celebrating the life of Auralia Klimmek, age 98, of Albany, will be at 11AM on Wednesday, January 29, 2014 at the Seven Dolors Catholic Church in Albany.  Father Cletus Connors, OSB will officiate and burial will take place in the parish cemetery.  Auralia passed away peacefully on Thursday with family at her side.  There will be a visitation from 4-8PM on Tuesday, January 28, 2014 at Seven Dolors Catholic Church in Albany and again after 10AM until the time of service on Wednesday.  The Christian Mothers will pray the rosary at 7:00 PM Tuesday evening at the church.  Arrangements are being made with Miller-Carlin Funeral Home of Albany.Auralia was born April 13, 1915 in Arban to Joseph and Magdalene Hadrich Young.  As a young child she and her family moved to Holdingford where she attended elementary school and graduated high school as Salutatorian of the Class of 1933.  She continued her education at the St. Cloud Teacher’s College and received her teaching certificate in elementary education.  Auralia began her teaching career in one-room school houses in the Holdingford, St. Wendel, and Albany areas.  Over the years she continued her education, receiving her Bachelor of Science Degree and her fifth-year certificate from St. Cloud State University.Auralia married Wallace Klimmek on June 21, 1941 at St. Mary’s Catholic Church in Holdingford.  The couple lived on the family farm north of Albany where she cared for her bountiful vegetable and flower gardens, canned, baked delicious coffee cakes, and was well-known for her strawberry jam and overnight hamburger rolls.  Never believing in idle hands, she sewed, embroidered, knit beautiful afghans, and crocheted many complex doilies, tablecloths, and a full-sized bedspread .  She lovingly pieced and quilted numerous quilts for all her family members, including grandchildren and great-grandchildren.During her years on the farm, Auralia was called back to teach at various schools until her 1980 retirement from the Upsala Elementary School District.  There she taught several grades but enjoyed her kindergarten classes the most.  Many of her former students still fondly remember her.Auralia enjoyed her travels to both U.S. coasts, Hawaii, Victoria, British Columbia, Quebec, and Niagara Falls, Canada.  One of her summer school classes included a trip to the Caribbean Islands.Community was important to Auralia, who served on the Board of Directors for the Albany Community Center and as secretary for the local Senior Citizens group.  She was a member of several mission groups, as well as a lifetime member of both Christian Mothers of Seven Dolors and the Pioneer Club, where she spent many hours quilting. Her faith was very important to her.Auralia is survived by her three daughters: Jeanne (Jack) Flynn of Va., JoAnn (Terry) Flyntz of Md., and Judy (Rick) Smith of Avon; eight grandchildren, twenty-one great-grandchildren, and two great-great- grandchildren (twins) expected midsummer.  Also surviving are sisters and brother-in-law, Irene Rathman of Calif., Maxine (Bob) Senninger of Mo., Dorothy Klimmek of Fl, Harvey Koglin of Albany, and many nieces and nephews.She was preceded in death by her husband Wallace, May 18, 1998; her son Donald, October 7, 2008; her parents and all her siblings: Minnie Gaida, Louise Becker, Helen Harlander, Tillie Zeis, Olive Muyres, Mike, Albert, Leo, Edward, Herman, and two infants.A special thank you to Linda, Judy, and all the other ladies from the first floor and the staff at Mother of Mercy for the loving care shown to Auralia during her stay and the special care givers with Albany Hospice.  She will be greatly missed by all.In lieu of flowers, memorials are preferred to Mother of Mercy Foundation in Albany.

There will be a visitation from 4-8PM on Tuesday, January 28, 2014 at Seven Dolors Catholic Church in Albany and again after 10AM until the time of service on Wednesday. The Christian Mothers will pray the rosary at 7:00 PM Tuesday evening at the church.

In lieu of flowers, memorials are preferred to Mother of Mercy Foundation in Albany.

We all loved Mrs.Klimmek.Very wise and loving,she did a great job.

My first years of teaching at Upsala were during Auralia’s time there. Two of our children had her in kindergarten. Sweet lady!

I think of Mrs. Klimmek every time I use my Debit card and sign with the plastic pecil on the card reader. I regularily comment to the clerk that my terrific 3rd grade taecher would not like this penmanship! Thank you Mrs. Klimmek my all time favorite teacher.

May the one and only like no other Auralia Rose Klimmek rest comfortably in peace, she challenged scripture in years”…For the days of my people will be like the days of a tree, And the work of their hands my chosen ones will enjoy to the full.” Isaiah 65:22.
“And I will pray the Father, and he shall give you another Comforter, that he may abide with you forever.” John 14:16; John 5:28,29; Psalms 37:29