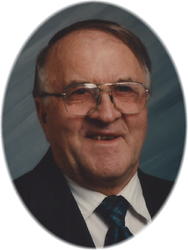 Mass of Christian Burial celebrating the life of Anthony “Tony” John Hondl, Jr., age 94, of Albany will be at 11:00 AM on Saturday, November 29, 2014 at Seven Dolors Catholic Church in Albany.  Father Brad Jenniges will officiate and entombment will take place in the parish cemetery.  Tony passed away peacefully Tuesday afternoon at Mother of Mercy Nursing Home.  There will be a visitation from 4:00-8:00 PM on Friday, November 28, 2014 at Seven Dolors Catholic Church in Albany and again after 10:00 AM until the time of service at the church.  Parish prayers will be at 4:00 PM Friday evening.  Arrangements are being made with Miller-Carlin Funeral Home, Albany.

Tony was born on January 12, 1920 to Anton and Agnes (Knapp) Hondl in Albany.  He was raised alongside eleven siblings on the family farm.  Tony entered the US Army in 1941 and proudly served his country as a part of the engineer company with the infantry in the Pacific during WWII.  Upon returning in 1944, he resumed working with his family.  Tony and Ralph handled the dairy cows and George handled the pigs.  Family was very important to him and he enjoyed having his nieces and nephews visit.  Farming was his life and he had few hobbies, although he loved going to auctions and shopping for tools and gadgets.  Tony spent lots of time at the Legion and helped them whenever he could.  He and Ralph lived together on the farm until he entered the nursing home in April of 2013.  Tony was a member of Seven Dolors Church, the Albany Legion, and the Knights of Columbus.

He is preceded in death by his parents Anton and Agnes, his brothers George, Mathias, and Mathew, and his sisters Agnes Dattilo, Ann Maslow, and Mary Hondl.